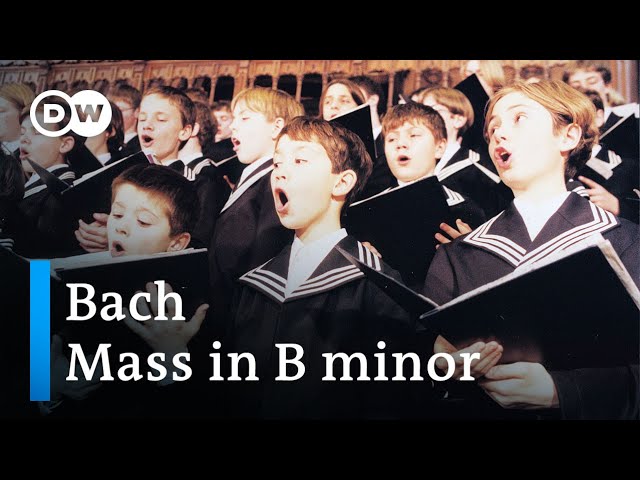 One of the greatest musical works of all time: The Thomanerchor Leipzig and the Gewandhausorchester Leipzig perform J.S. Bach’s Mass in B minor (BWV 232) in the Church of St. Thomas on July 28, 2000. The stunning backdrop to the performance is particularly fitting since Bach was music director of the church (Kapellmeister) from 1723 until his death in 1750.

Johann Sebastian Bach (1685 – 1750) did not originally intend the posthumously named Great Catholic Mass (also known as: Mass in B minor or High Mass in B minor) as a complete mass. Bach, a Lutheran himself, composed four “short” masses (in F major, A major, G minor, and G major; BWV 233-236), which consisted of only Kyrie and Gloria – the standard in Lutheran liturgy at the time. For his Mass in B minor he reworked an additional shorter mass, ‘Missa of 1733 ’(BWV 232 I), which he had originally composed after the death of August the Strong, but which is believed to have never been performed.

It is likely that Bach reworked various previously composed pieces for the Mass in B minor, combining them into a complete mass as late as 1749. The pragmatic multiple use of one’s own compositions is called the “parody process” and was common in Bach’s time – in those days church music was simply music for everyday use. The Mass in B minor gained appreciation soon after Bach’s death in 1750, and in the 19th century it was even considered the greatest musical work of art of all time. It still has a fixed place in concert programs today. The handwritten original manuscript of the mass, which is currently held by the Berlin State Library, was inscribed into the UNESCO ‘Memory of the World Register ’in 2015.

The performers of the piece are the Gewandhausorchester Leipzig, the Thomanerchor and an ensemble of soloists, including Ruth Holton (soprano), Matthias Rexroth (countertenor/male alto), Christoph Genz (tenor) and Klaus Mertens (bass). The piece is conducted by Christoph Biller, the church’s current Kapellmeister and Bach’s 16th successor.